Only unity will get us through this.

Unity is our best bet against this aching pain.

No one can stand within your own shoes.

Don’t let that discourage you.

Everyone has a story to tell.

Don’t give in just because the weight on your shoulders feels unbearable.

Suffering in silence must come to an end.

Only more suffering comes from turning away.

Understand that there are others out there with open arms.

Love and light is ready to be sent your way.

I’ve had an itch to write a post like this for a while now. I’m not entirely sure if this is meant to be written as a piece to vent or to just to express what is going on through my mind, body, spirit, and whatever the hell else is going on in my life, seeing that maybe someone could relate to me. Or maybe possibly add some sort of inspiration out there that speaks, “You’re not alone” or “Feeling a sense of imbalance from time to time is not out of the norm”. If neither one of those things happens, that is perfectly okay with me. I tend to go with the flow.

Okay, enough mindless rambling! Now… for perhaps the past year and a half or so I have been getting these really oddly or randomly timed sensations of something feeling ‘off’. I do know for a fact that the intuition is never wrong, but the mind that is clouded with confusion, anger, sadness, fear, or what have you can throw you for a loop. My own sensations on whether something feels ‘right’ or ‘wrong’ has indeed worked in my favor by keeping me safe and on the right track. Oh, and what I mean by sensations are what some people might consider to be ‘gut feelings’, instincts, perhaps even visions, and or sensations within the body that might signal for something. Some would believe that our own intuitions are guided by higher sources, or higher light beings. These sensations can be very sporadic at times, but those timings happen for a reason.

The reason why I am pointing this out is I’ve been noticing a pattern with some of these sensations where I feel as though something feels ‘off’. They’ve been happening around the same time of night, for a consecutive amount of nights (going from a few days straight to two weeks straight to a week of nothing to a week of something), cycling an odd pattern of ‘off’ feelings and then finally, majority of the time the next day or a few days after those sensations, something happens. Most of the time, these events aren’t major, and sometimes they are. (For the sake of anonymity, names, faces, dates, and exact details will NOT be revealed). Whether it’s little everyday annoyances to much bigger and more dramatic life changes varies. Lately, some of these events have been turning into bigger, more serious life changes, and a lot of them are not directed towards me at all.

On the flipside, I do have a lot of positive experiences where I do see something good coming my way, and eventually it does. There’s sometimes a bit of repetition to these positive sensations, yet not as much as the more ‘off’ sensations.

When I do get these weird sensations, I do what I can to cope with them like listening to music, writing, drawing, watching something on Youtube, meandering on Twitter, etc. Sometimes even talking to someone helps. Eventually after a few moments the ‘off’ sensations go away, but only to a point. I still feel remnants of it towards the back of my mind and in the bottom of my throat and stomach.

Anyway, I hope that this makes sense to those that might be experiencing this as much as I do. Feel free to drop a message if you’d like. I hope you all have a wonderful evening!

These synchronistic events happen for a reason;

Not for a season.

It’s time surrender to and allow the eternal flow of the Universe to come;

It’s power will show you exactly where you need to go.

In reality, it’s really not that hard to go with the flow;

The only thing that stops us is the mind.

It stops us from growing, learning, perceiving, and even being kind.

In reality, there really is nothing to fear my dear.

So let go and let be.

Sooner or later, our truth will be bestowed onto you and me.

Just fill yourself with love and light, that’s all you need see? 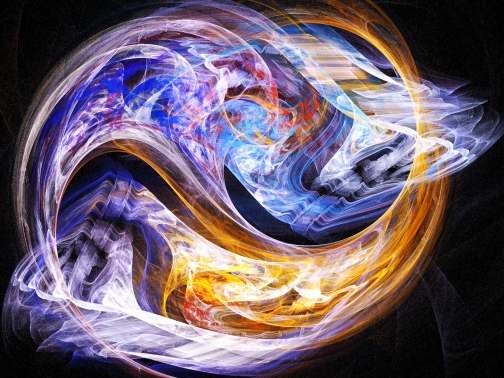 It is he who walks the earth of clouds, rain, and fire.

It is she who is of snow, ice, and frost.

It is he who controls the winds, floods, tornadoes, and wildfires.

It is she who casts blizzards, snow storms, and hell frozen rain.

It is he who creates the steam, the mist, the fog, and the smoke and ashes from above.

It is she who creates the flurries, the jagged ice shards, and shows the magic of the sun reflecting from pure white snow below.

It is he who loves her with the fiery passion from the sun within his veins.

It is she who loves him from the gentle frosty lights that sparkle within her heart.

It is they who join one hand and hand for this dance.

A dance of a lifetime.

A dance made from eternal infinite love.

The fire from within him does not cause her to fade and melt away.

The ice from within her does not douse the burning passion from within.

They compliment each other in every and any single way known to the universe.

It is they who have existed since the beginning of time.

It is they who continue to rule and revolve around us.

It is they that help keep balance, love, and light at a constant rate.

It is they whom take place in many tales made many moons ago.

They are within us all.